My mother was  eight years old when the Spanish Civil War ended. She was taught how to survive during that terrible time of the postwar.

She never went to school, she had to go with her father and his working gang (six men) to the fields where they worked. They went with their mules and had to leave very early every morning to avoid the heat, they travelled between one and three hours to get to the fields. She was in charge of preparing their food. She had to cook a big meal for  seven hard working men. It was a big responsibility for such a young child, but that was her life.

She was so small and the pan was so big that my Grandfather had to build a kind of step with a tree trunk for my mother to be able to reach it. 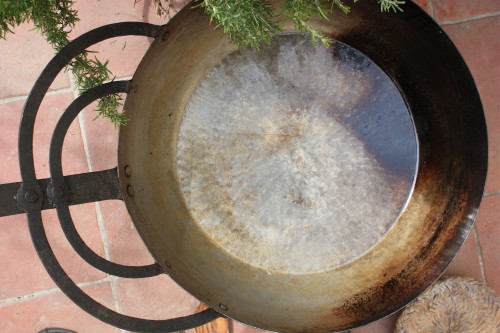 In those times in Spain women were taught to be housewives as  everybody was poor and there was not enough work for everyone. Being a housewife was  very hard work. You had to survive with what your husband brought home and you had to have as many children  as God sent you, and you had to look after the house, the children, the livestock…. 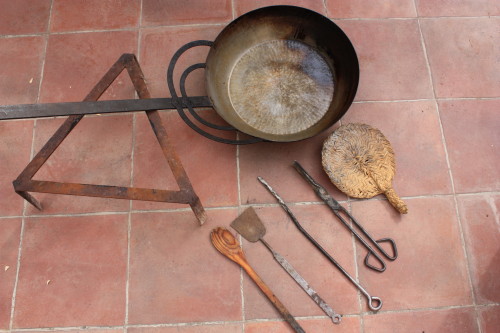 Traditional pan and utensils used for cooking in the country

My mum learnt very early in life how to feed a family properly with very few resources.

The stalwarts  of the cooking pot were: 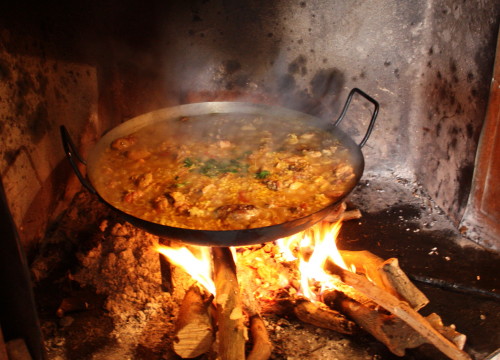 Murcian rice. Typically made over an open fire

She was taught the basics and she became a Master Cook. She is now eighty one  years old and cooks every day like she has done  all her life. My parent’s house is like a restaurant, It does not matter when or how many people appear there, there is always plenty of delicious Spanish traditional food for everybody and more.

I’ve learnt all my cooking skills from her, but I think I’m the last generation of cooks in Spain who have learnt from our mothers. Every single dish require lots of ingredients, lots of time, lot of pans and above all lots and lots of love.

At THE SPANISH THYME TRAVELLER food and wine are the basis for all our holidays. If you fancy a food and wine tour have a look at our Borgias Tour, a five day trip through Valencian and Spanish food and culture in Xativa and the surrounding inland area.

10 thoughts on “What makes a good Spanish cook?”