The outdoors is one of my great passions and another one is walking which is good as I can combine both! It would drive Julia crazy if I did my walking indoors.

Over the years I have walked many parts of Spain and on all kinds of routes,paths and tracks. I have done El Camino(See post on it: A walk of a Million Footsteps), I have walked in Ordesa National Park, in Cazorla Natural Park,in Almeria’s Parque Natural de Cabo de Gata,in Los Gredos, Las Alpujarras,Extremadura, Los Picos de Europa and many other mountain ranges. I have wandered the paths throughout Valencia’s inland regions and have walked many a forest and canyon in rocky Cuenca and Teruel. 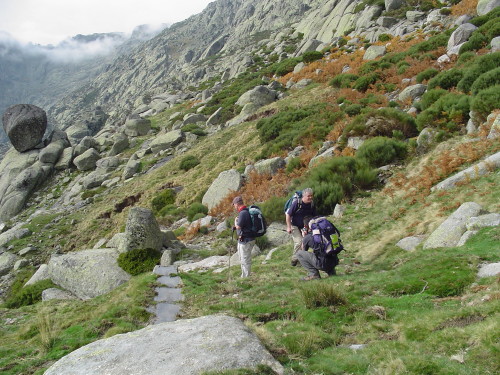 Logically, then I have learnt a few things (but probably should have learnt quite a few more!) and I have picked up that there are lots of different kinds of paths in Spain.

There are the traditional,historical ones which have seen countless travellers’ footsteps and in many cases have a paved and purpose built infrastucture with local stone incorporated in a very natural and practical way. All these ones are a man and a mule width which was typical in older times as so much was transported in Spain by mule trains throughout the country. 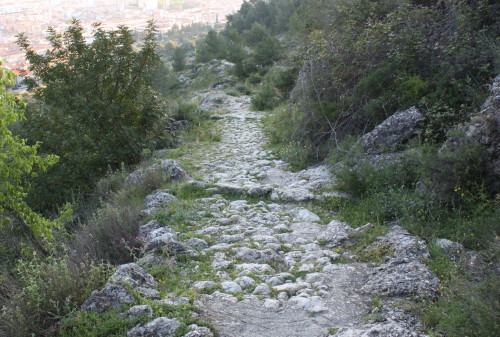 Ancient paths built in times gone by….this one near Xativa

These mountain routes were a vital lifeline for villages in the sierras because there were no other routes between them and civilisation so they were well looked after, some of them being veritable  examples of perfect stone engineering. La Ruta de Carlos V in Los Gredos mountains, Extremadura is partially paved with local smooth stone….a beautifull crafted route through spectacular scenery which must have taken alot of time and effort to build. 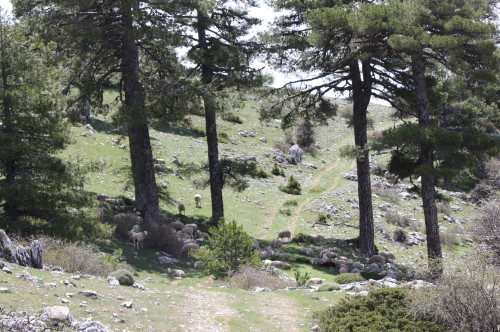 These routes also incorporate another type which are cañadas. These are rights of ways for farmers/herdsmen who move their cattle twice a year to better pastures.On some of these the monarchy in bygone days set up taxing systems on cattle going to market. These routes are somewhat wider and tend to be tracks but also go through areas of a man and a mule width paths. 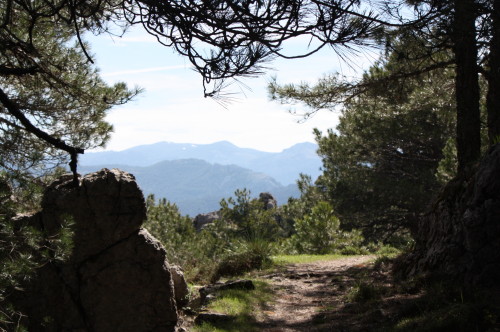 One person width paths are also common  for hunters and local routes and you get the typical path set up by the local town hall who organise paths locally and these are often existing paths and normally narrowish (one person). Sometimes you get new paths which are made…these often peter out and do not work as they have been artifically set up.The natural and ancient routes are the ones that still work well although it is possible when wandering in the mountains to come across vestiges of time gone by. Paths no longer used. There is one near Tous in Valencia in the middle of nowhere which is a lovely path through a dramatic rocky outcrop which is built with flat rocks and supported corners with walls but nowadays it is a path to nowhere as the village it used to go to is submerged under Tous reservoir.You can only get to it by walking a long way and then returning by the same route. 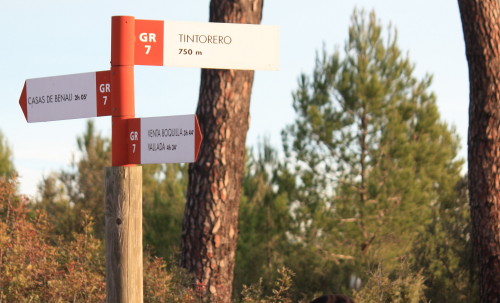 So, there is an excellent system of paths in Spain that in general is well maintained and signposted. Here below are the basics of how they are signed for anyone who is uninitiated in the ways of these organised routes. 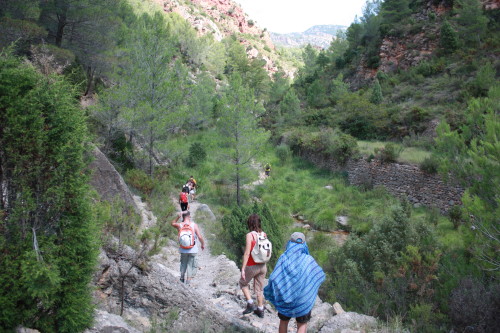 There is a network of marked routes which have a colour code to indicate the type of path and this colour code marking can be seen along the route at 150m to 300m intervals or at strategic points along the route(crossroads etc). There are also wooden signposts indicating direction and kilometres(and sometimes walking time to each destination). 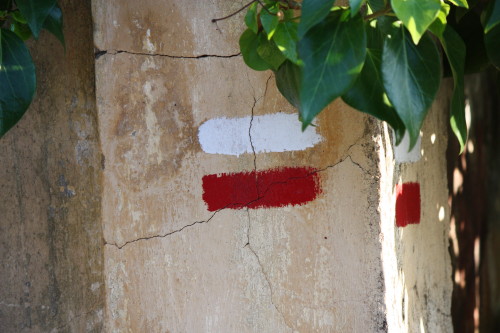 The red and white sign(see photo) is an indication of a GR (Gran Ruta) ..literally a big route and comes with a number e.g. GR7 which is a specific route from A to B and marked along the path with the red and white bars to indicate the route.These routes,as their name suggests are long routes and normally pass through some pretty dramatic mountain scenery and lonely areas. 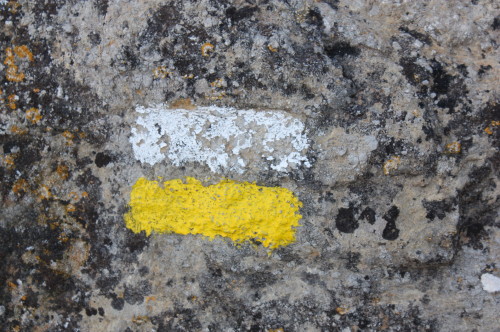 The yellow and white bars indicate a PR(Pequeño Recorrido) which means short route and are generally in and around towns and villages and are often circular routes but not always.

Then, the green and  white are SL(Sendero Local) which means local route, are also near towns and villages and tend to be circular.

This is a sign indicating that the route you are following is a GR(Long route),red and white, a PR(short route) yellow and white and a SL(Local route) green and white. A bit confusing but they separate at some point but at this point they share the same path.

Basically for all of them the two bars indicate continue and a cross through the bars indicates “not this way”. Pretty simple but highly effective. Also sometimes you can see two or three of the colour codes on the same route which is a little confusing at first but it is simply that for a distance the path is common to the different routes. 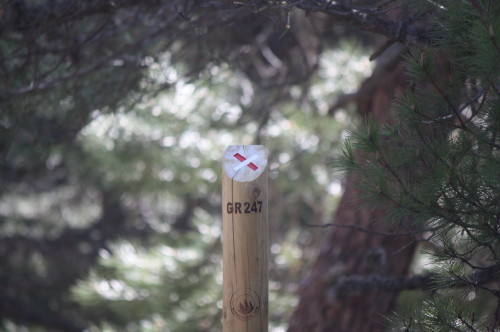 This is a GR sign saying “Not this way!” You can find these painted on rocks,trees,walls etc

Another important set of signs in Spain which can be see in many places as you can walk to Santiago de Compostela from any point in Spain are the ones for El Camino. A scallop shell is used to indicate the way, often in yellow on a blue background: You will also see yellow arrows indicating the direction of the route.The Camino Frances which is the popular one is very well signposted.It is almost impossible to get lost especially if you do it in spring and summer when there are plenty of other walkers. 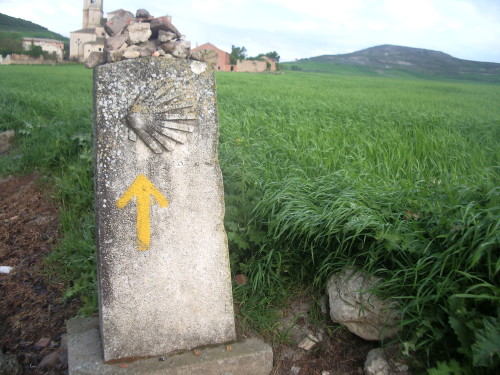 El Camino de Santiago has some of the best signing in Spain. Always a variation on the scallop shell and the yellow arrow

Having said that, on normal hiking paths, one should be very careful especially in the mountains as it is easy to get lost as some of these markers are old or removed making it easy to become disorientated. This system is great but one should always carry a map(or GPS) of the area where you are,food,water,correct protective clothing and remain vigilant of  the route taken. You’d be surpised how many people you meet lost! And I have been lost a few times, even with a map!! So  take care out there folks and enjoy those millions of kilometres of country and mountain paths!!

12 thoughts on “Walking in Spain: Paths and Caminos.”