There are simply hundreds of canyons,small gorges,ravines or gullies in Valencia ranging from the massive to the small. The best ones are the least known  and it is amazing how you can explore what would be a major tourist attraction in most countries and not meet anyone at all for three or four hours.

Dramatic,rocky and often very wild  these places have their own micro ecosystems that have some great geological phenomena, fauna and flora.

A good example of  this and probably one of the best known in S.Valencia is el Barranc del Cinc which is in the Parque Natural de la Sierra Mariola. It has a spectacular path which winds through towering rock faces, home to Griffon vultures which circle overhead  whilst you make you way along the canyon. A mixture of pine forest and open mountainside make for easy walking and lots of shade. Red squirrels,woodpeckers, and a whole variety of smaller forest birds can be seen on this route.

Then, near Bocairent,one can walk in what used to be one of the most beautiful canyons in Valencia, el Barranc dels Tarongers. Burnt by a bad forest fire two years ago it is somewhat bare of vegetation although there are very small signs of  recuperation. A very dry spring this year hasn’t helped but even though the canyon is a bit bare it is still dramatic and has signs of an ancient cart track hacked out of the side of the mountain to enable carts to climb the gorge from Ontinyent. Climbing up the slope of the canyon you spend most of the time above the gurgling mountain stream below although  you do cross it next to an abandoned watermill to continue the path up and beyond. And when you finally start to exit the canyon you can see high on the other side, perched atop of the steep and rocky mountain a chapel which belongs to the town of Bocairent. Stark and dramatic it breaks the skyline whilst below  a stony track winds climbing up from the medieval town.

They say small is beautiful. Well,the Barranc de Fosch fits this description nicely. It is tucked away in a fold of the mountains on the opposite side of the wide valley in which Montesa sits.The Rio Canyoles is just a stream at this point and you have to cross it to get into the canyon. Amost immediately  a shady wood makes for an abundance of  birdlife and a very pleasant walk.The path climbs through a narrow and rocky gully with cliffs and steep mountains on both sides and soon you are out in the open with views back behind you of  the town of Montesa with its Templar castle.


The climb becomes more pronounced  and the path weaves through countless strawberry trees(Madroños in Spanish, from which you can make a liqueur). Just when the path starts to peter out you get to a spring shaded by trees. On this route you can see mountain goats and numerous birds of prey such as sparrow hawks and short toed eagles.


Then  my favourite is a canyon near to where  I live which not only is huge it is probably the wildest and loneliest. Known to locals as El Barranc “Gran”, it is approximately ten kilometres long and is 350 metres deep in places. Home to numerous herds of mountain goats, wild boar, red squirrels, golden eagles, short toed eagles, peregrine falcons, sparrowhawks, goshawks, woodpeckers, blue rock thrush, golden oriol, different types of lizard and snakes amongst others! It is a veritable wildlife sanctuary although it is hunted in during the hunting season making all the animals  very timid and you have to be patient if you wish to see some of the bigger animals.The rocky outcrops get shaped into fantastic shapes and the landscape is dramatic if only because of the huge dimensions of the canyon. 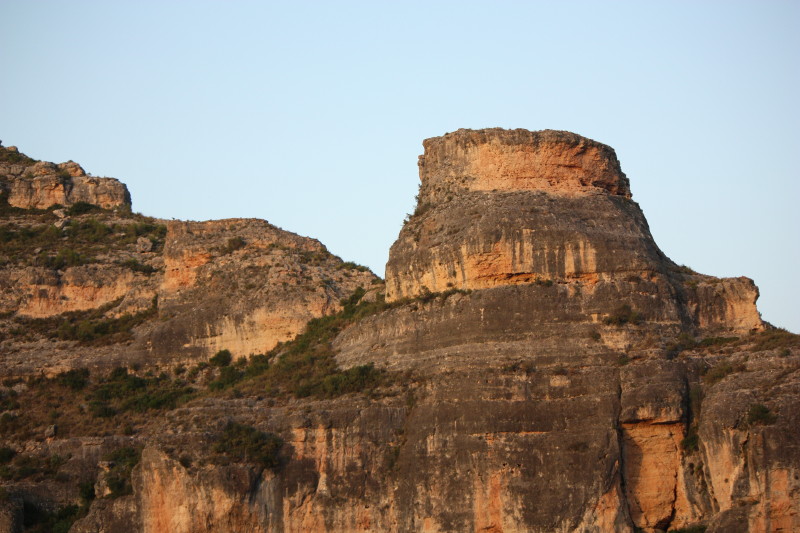 Badly burnt also, about ten years ago, large parts of the Barranc are without forest  making it a slightly desolate place at first glance. However, the fact that a pair of Golden Eagles are nesting there is heartening and the amount of mountain goats is almost funny(not so much for the local farmers who complain of crop damage). I think the local farmers are probably right because I often see in the very early hours of the morning goats going into the canyon from the more populated(by humans) end. So they have been in the fields culling fruit trees, vegetable gardens etc They often watch from the tops of cliffs, precariously perched on  large rocks, as we make our way along the canyon safe in the knowledge that although we are close we are never going to climb the sheer walls so we are no threat to them.

Every time I go back to one of these places I always discover more things, places and animals. A delightful way to spend a few hours. The best time of the year to walk in these canyons is spring,autumn and winter. The summer is ok if you are prepared to get up very very early but otherwise it is a harsh paradise with the Mediterranean sun forcing even the boldest of mountain goats to lay up in the shade high up on a ledge until the cooler moments of the day.


The Spanish Thyme Traveller  includes walking in some of its holidays. The Iberos Tour is the holiday that has several long walks including one through on of these fascinating canyons. A great mixture of the Spanish outdoor with good food and wine and several cultural visits included.

6 thoughts on “Walking Canyons in Valencia”