As most of you know by now Spanish food is something we write about alot. Today is no exception! One of our favourite places in Valencia city to spend time in, is the Central Market. However, over the years it has transformed quite a bit. Pure economics have dictated that many stalls now cater to the increasing number of tourists who visit the market. They sell cut and portioned fruit or smoothies to the hordes who literally invade the market from their cruise ships that dock in Valencia’s port. Whilst this is good for some it is terrible for others. The fishmongers look on forlornly as people buy saffron,smoothies and ham and in their ‘fish area’ just take photos. No one buys fish to take back onto the boat. 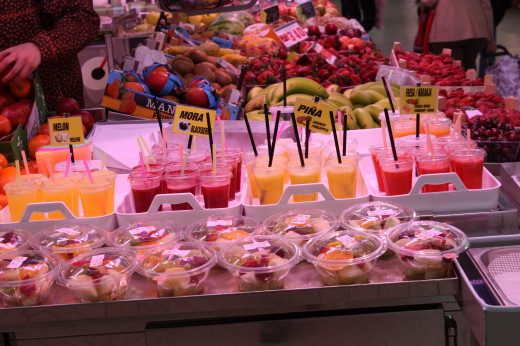 Product for the tourist

So to get away from the hordes all you need to do is go to one of the other fifteen or so covered markets that there are in Valencia. Yes,fifteen so lots of choice! Amazing when you think about it.For example, Ruzafa market is a lovely market that caters to the neighbourhood  that corresponds to the same name. It is in fact Julia’s part of the city where she grew up and it is where her mother has bought fresh produce for the last fifty-five years, so she knows nearly all the stallholders and has an expert eye for quality and a good buy. 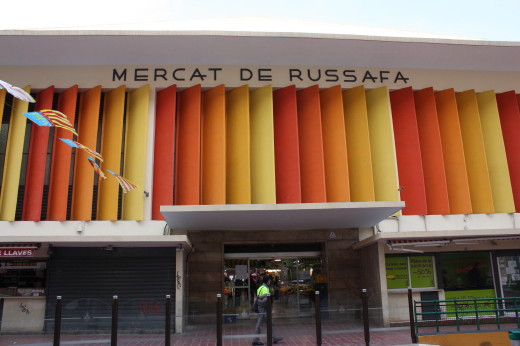 Ruzafa is one of the old parts of Valencia and its name supposedly means garden in Arabic. It has lots of interesting 19th and 20th century buildings and  the area actually dates back to Moorish times when it was an estate-like park(hence the name) made for one of the Moorish princes(the son of Abderraman I). After the Christian reconquest the park was turned into fields for agriculture and remained the same for centuries. Nowadays, Ruzafa is part of the centre of the city and is famous for its passion for Fallas(the springtime fiestas celebrated in March). 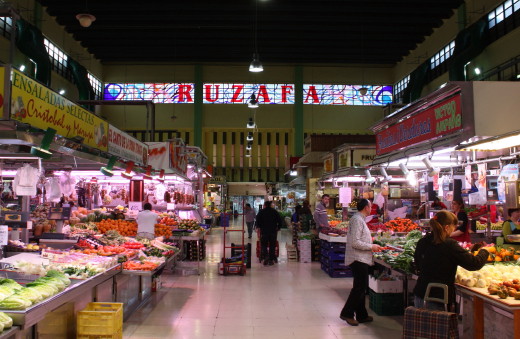 Some of the more intrepid tourists make it to this market but it continues to be an authentic market that sells 98% of it’s product to the people in the barrio(neighbourhood). So the atmosphere is more familiar and everyone knows everyone. On our last visit Julia chatted to stallholders and asked the banana lady if she is related to the gent who sold bananas at the same stall forty years ago and she said that she is his granddaughter. A true family business. 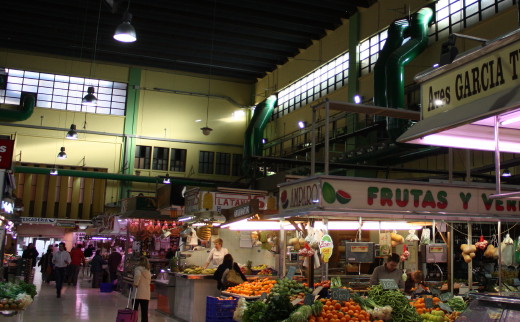 The Banana lady in the centre of the photo

Ruzafa market is functional. It’s exterior is almost ugly with painted colours on each side to liven it up. Built in 1957 it was built in a place where they had a market for at least  hundreds of years. The interior is typical of Spanish covered markets, with wide aisles and good lighting and there is an attractive stained glass window at one end  of the market.There is also a classic bar for breakfasts and almuerzos(mid morning snack). 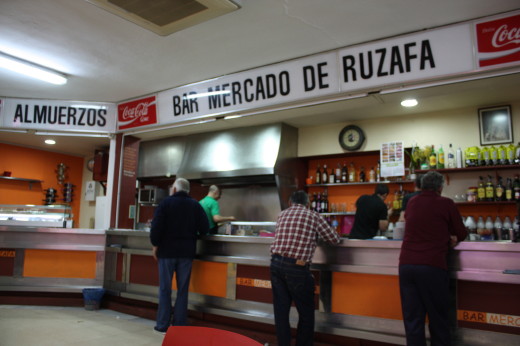 The atmosphere is very friendly in the market.Virtually every stallholder greets you with a genuine “Buenos dias” and a smile. The produce is first class and there is plenty of choice but as is typical in most Spanish markets it is the ‘in season’ local and national produce that takes the limelight. 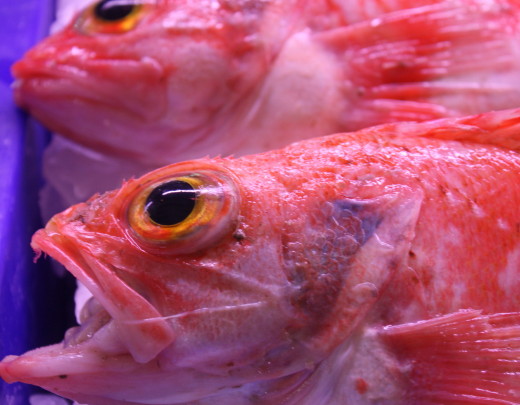 Salmonete on sale in Ruzafa market

This is something which I have always liked in Spain. There is a season for everything and people look forward to each specific season rather than having melons twelve months of the year. This has changed over the years but fundamentally seasonal produce still rules!! 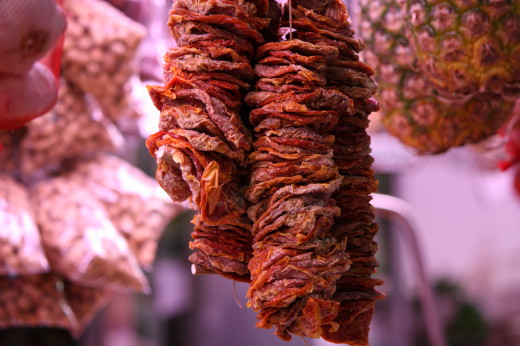 Wandering round the market is always fun as Julia always points out who is who and says things like, ” Look. I used to play with my friends there.” or “When I was a teenager I used to spend hours sitting on those church steps chatting with my friends.” 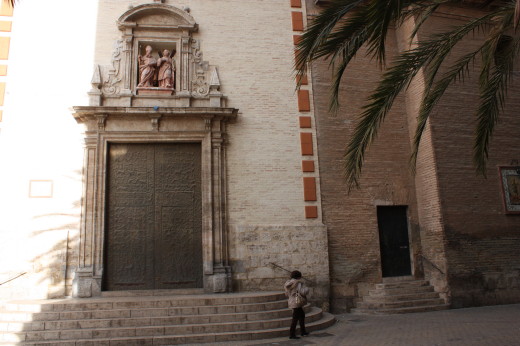 The feel of the whole area is of a barrio(neighbourhood) and whereas  before the surrounding area was a little run down over the last 6/7 years lots of new bars,restaurants and cafes have sprung up around the market in the surrounding streets making the whole area a magnet for young people and even people from outside the neighbourhood.Without doubt the crisis is putting a strain on businesses but there is a feeling of positiveness that radiates from the market. If you are ever in the area drop by and feel the vibe! You wont regret it.