Two very short stories about brief encounters I have had in Spain:

As I walked across the green meadow, the weak early morning light played through the trees onto the surface of the transparent tea coloured river in the distance and enhanced the summer colours all around. That feeling of being completely alone with nature is a great feeling. The wildflowers, the large green full leafed trees following the river’s course and the pale blue morning sky combined with different types of airborne insects and floating dandelion seeds to make a perfect Galician summer’s day. 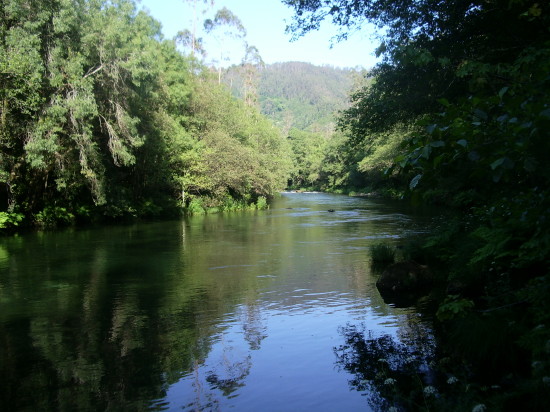 Totally concentrated on the sounds of the river and the rising trout I nearly had a heart attack when a person suddenly appeared right in front of me by standing up in the long grass! Ahhh! Ooh! Jesus! What a surprise! “Hola! Buenos dias!”. The man who appeared out of the grass was small in stature, almost hobbit like. He said “Bo Dia” and proceeded to talk very fast in Gallego (Galician, the local language/dialect spoken in Galicia). It turned out the man had been invisible before I got near him because he was squatting down collecting grasshoppers in the long grass. The grasshoppers were to fish with, as the man showed me by hooking one onto a hook (a common fishing technique in Galicia). 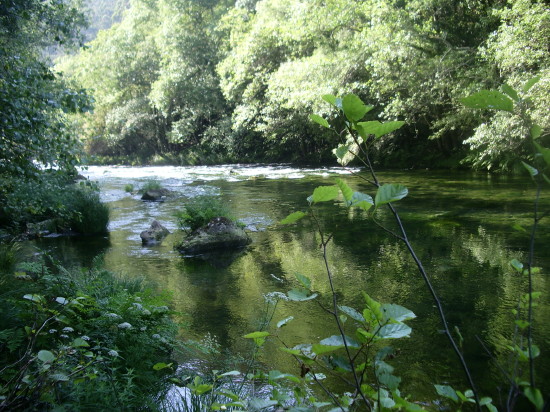 Beautiful river running through a beautiful wood in Galicia

Even though I can understand a little Portuguese(to which Gallego has similarities) I couldn’t really understand the man’s “Gallego”. He laughed a lot and seemed to enjoy our onesided conversation. He even slapped me on the back a couple of times so we had achieved a certain fishermen’s camadarie even though  we had a totally confusing conversation about grasshoppers, bridges and fishing. Later whilst I was flicking a fly downstream, the little Galician man came by with his grasshoppers, walking on the other bank and shouted something in Galician which with the noise of the rapids where I was fishing, was even more difficult to understand than the conversation before!  I waved back, smiling and as he walked off I shouted,”Hasta luego!.” 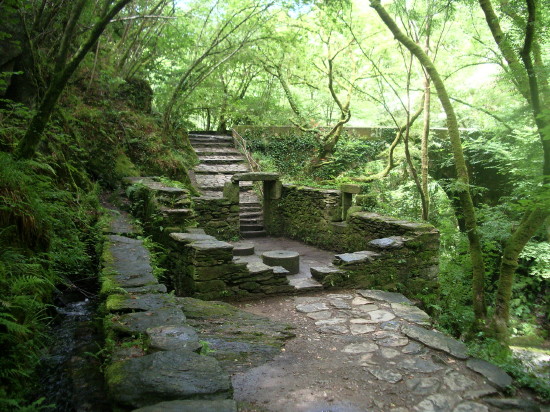 Old mill near the river

Suddenly I was alone again in deepest, darkest Galicia, kilometres inside a lost rural world along the banks of a forgotten river and deep in a magical oak forest.

I just love these spontaneous bumpings into people. Over the years I have lived here in Spain, I have met many people in these “unexpected encounters” in wild places and in not so wild places.

Here’s another example: Driving into the village where I live I saw a Guardia Civil control point and as I got nearer, sure enough, they pulled me over. They were the classic pair of Guardia Civil, the older, more senior and wiser one and the young rookie type one.(Now I think of it most of them now are all young!) As I wound down my window the younger one of them said “Documentacíon, por favor?”

“Sorry I haven’t got any ID on me.” I answered. Then the older Guardia Civil looked at me and asked,  ”Where are you going?” and I said, ”To my house which is here in this village.”

His stance changed and his face took on a suspicious look and he bent down to get a better look at me in the car.

The Guardia Civil then said,” In No.7? There are some foreigners living in that house.”

With a look of realization he said” Oh Right then you’re the guy who lives there. Ah, OK, no problem…continue on your way.”

I just love these kinds of encounters in Spain.

5 thoughts on “Unexpected Encounters of the Spanish Kind”