Next time you are on holiday in Spain whether you are lying on the beach, visiting one of its cities, winetasting in a bodega  or walking in the mountains , take a moment to think about water.

It is often said water is the fountain of life. Well in Spain, water is life. The country’s harsh climate, especially in the south, means water has been central to the history, development  and essence of this land of plenty. It has moulded architecture, the landscape and the very heart of the country. 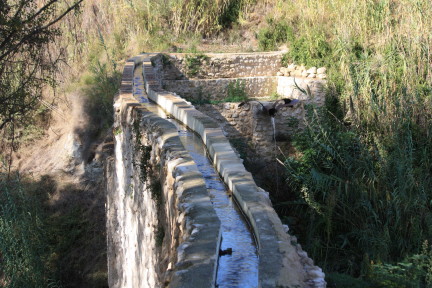 Ancient Irrigation channels and aqueducts all over Spain

Let your mind imagine a scenario just for one minute:

“Picture a little dark-eyed and darked-skinned  girl of nine years old walking  and leading a donkey laden  with four large clay amphoras sitting snuggly in their  woven holders. The girl only reaches the beast’s shoulders but takes the lead with purposeful strides. The unlikely duo are making their way up a windy, rocky path(with the typical width of a mule and a person)  to a spring on the side of a dry and rugged mountain. The girl must fill the containers with the spring’s cool, minerally water and be back at the farm before the sun rises much higher as the heat will become intolerable. As she reaches the fountain the cool shade of the fig tree gives respite from the already blazing sun. Having filled the clay containers she starts off down the stony track to the valley below.” 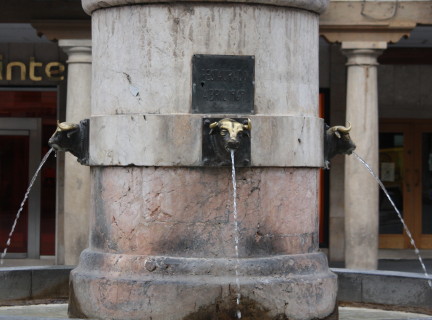 This sounds like something out of the 19th century  but in fact it is my retelling of what my wife Julia has always described to  me of  when she was a girl and how she  used to fetch the water from a spring about 800m from her grandmother’s house in the mid/late 1960s.Without the water from that spring  five small farms would not been able to exist in that dry and dusty valley. 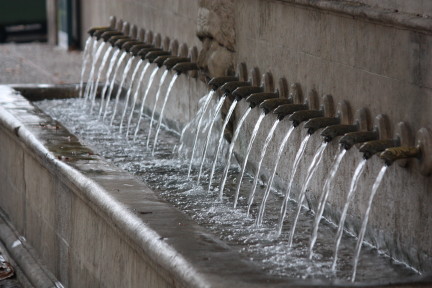 This, of course was the same all over southern Spain. No water meant no subsistence, no agriculture, no industry and no progress. Now there are irrigation, reservoir and long distance transfer systems all over the country that mean even the driest of places get water. Spring water bottling plants have sprung up throughout the last two decades in the most likely and unlikeliest of places meaning most Spaniards have access to quality drinking water. 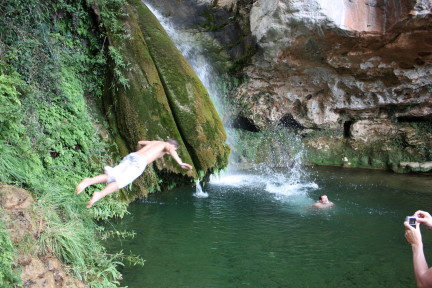 Throughout Spain you can observe the heritage of this ‘water culture’ which seems to have been particularly well managed by the Romans and the Moors who both understood and  controlled water in a way which partially explains their hugely successful civilisations. Ranging from the luxuriant fountains and water systems of the Alhambra to even the most basic Roman aqueduct like the one between Albarracin and Celia to the 16th and 17th century fountains dotted over different towns and villages, water has always been a central part to Spanish life. 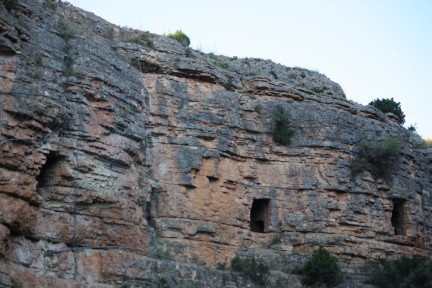 Carved into the mountainside a Roman aqueduct near Albarracin

Not only were fountains an important source of gossip when women gathered to fill their clay containers but washing areas were typically central to life all over the country. Some are still conserved but sadly many have been knocked down. Remains of wells, watermills and aljibes (underground water  deposits) are  still very common especially in the south of Spain. In my house I have a well in my cellar! 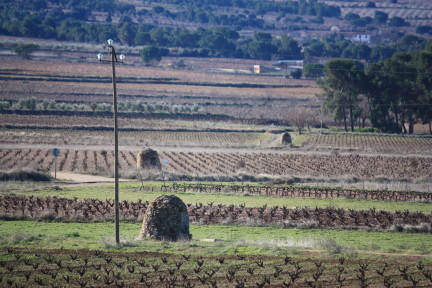 It is fascinating to see how over the ages the fountains in towns were not only a meeting place but also a means of showing off the wealth of the town. More fountains meant more wealth. In fact water was wealth in the past…nowadays we have lost  sight of this basic understanding. We take it for granted, waste it  and even pollute it. Thinking about it we should take a page out of the Romans’ and Moors’ book and nuture it as though it is liquid gold or even as though it were the river of life.

The Spanish Thyme Traveller organises trips where you can see some of these great vestiges of Spain’s water culture. For  info on trips see webpage : www.thespanishthymetraveller.com

2 thoughts on “The River of Life in Spain”