We continue with our Talking with Spain series which focuses on personalities from all walks of life in Spain.

This week we talked to Leandro who is a butcher. He also happens to be my cuñado(brother-in-law). He owns a market butchery stall in the local covered market of the Valencian town of Burjassot.The market is not a gourmet one but a typical Spanish market  which provides excellent quality fresh produce to the locals.

Leandro: 27 years in the meat trade

I often hear people say that Spain is a difficlut place for a vegetarian to live. While this in some respects is true in that Spanish food culture enthusiastically embraces all types of meat from wild boar to beef through to horse,it is also true that Spanish cuisine is full of fantastic vegetables and vegetable dishes. So vegetarians have a great selection of products.However, this article might be offensive to some so apologies beforehand but this is just a reflection of what’s out there. 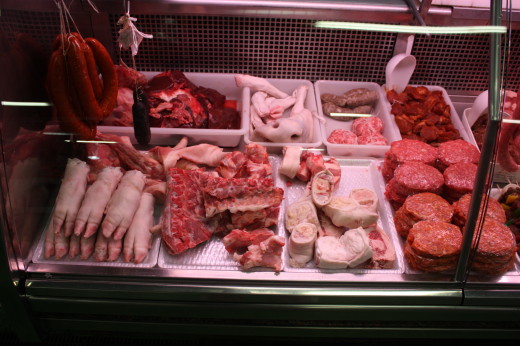 Leandro does not sell horse or wild boar but it is surprising how much he sells of the stranger parts of the animals. Or at least the stranger parts for an Anglo Saxon supermarket shopper! I have left out the “stranger” photos but sheep’s head,livers,cow’s and pig’s faces and trotters are commonly bought to make a selection of stews,soups and dishes.Historically very little went to waste from any animal in Spain.This, of course, is changing as the younger generations lose these customs. 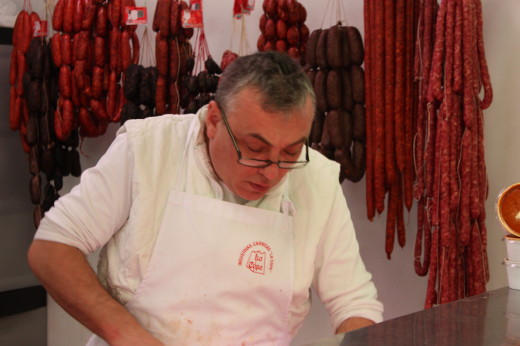 Part of the sales relationship with his customers means making them feel relaxed and in familiar surroundings and if you watch Leandro in action he has a great patter going with all the customers. His mix of cheeky,ironic and outright funny humour is so popular you can see the customers listening  and waiting to laugh. He is almost like a stand-up comedian.

So when did you start working in the meat business?

Well I started out when I was eighteen years old driving a meat delivery van. 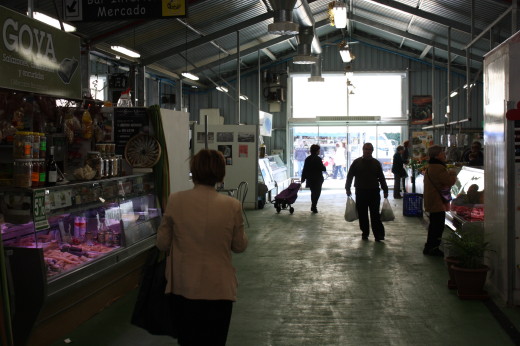 Part of the Burjassot market

When did you become a butcher?

Not long after and then a couple of years later in 1990 I set up my own business.

Which of your products sells best?

Pork is what sells most…all cuts and pieces!

How many hour do you work a week?

I normally  do about fifty hours a week, too  many but I can’t do less 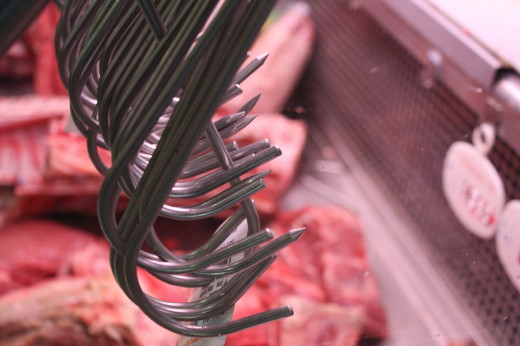 Has the economic crisis affected your business?

Definitely, I used to have an employee previously but now I only sell enough to cover one salary. Also the town hall moved the market from its original place in the centre of town temporarily to do rennovation work on the market building and we have never moved back from this less central location. 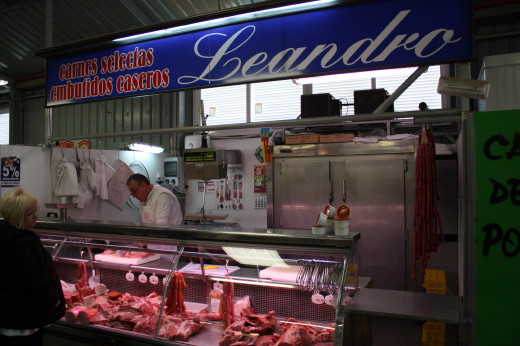 Leandro working behind his counter

How much holiday do you take every year?

Four weeks and always in August. 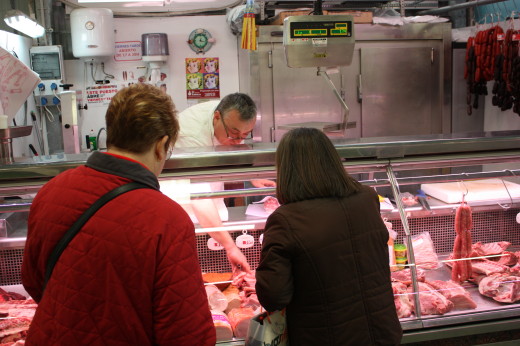 Leandro serving his customers and cracking a joke

Market life is not easy and Leandro like everyone in the market has to get up very early every day. He works for himself,by himself; long hours and on his feet all the time. The day to day  economic problems are directly visible in what the customers purchase.Leandro says people buy cheaper cuts,bones etc to make soups,stews rather than lamb chops or fillet steak. Like in so many sectors of the economy hard times are visible in the market but the jesting,joking and good humour that everyone in the place injects into their daily lives is to say the least impressive. A lesson for all of us.

The Spanish Thyme Traveller sells classy Spanish food and drink brands round the world. Email me for further info: pwaller@thespanishthymetraveller.com.

13 thoughts on “Talking with Spain: Leandro the Traditional Spanish Butcher”