All foreigners when they live in another country come across customs,food and habits  that are extremely strange to them or  at the least different from their own.
This post is about one of these “differences” which is searching,hunting,looking for, or seeking(call it what you like) ‘treasures’. As kids most of us have played at treasure hunting. Here in Spain the hunting or looking is for a different type of treasure.Years ago, on my first outing to the mountains of N.Murcia , 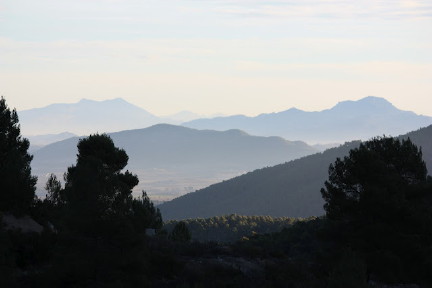 after a particularly  heavy downpour of rain, my in-laws and loads of family decided to don boots and rush off to the countryside.Weird behaviour,I thought. I soon realised that there was  a reasoning behind this sudden uncharacteristic enthusiasm for walking. I didnt click at first as when I first came to Spain, many moons ago, my walking activities in the mountains were seen by my wife’s family as slightly eccentric.Whilst walking,trekking and mountain sports are reasonably popular now in Spain in those days they were not and they were often seen as a strange pastime for foreigners who knew no better.Mountains were for goats,sheep and for hunting in.(Even recently when walking with friends through lonely villages in Los Gredos mountains a couple of old men asked us where we were going and why were we carrying rucksacks. They simply couldn’t understand that we could be suffering 6/7 hours of walking in the mountains for pleasure(and one of my friends was in agreement). 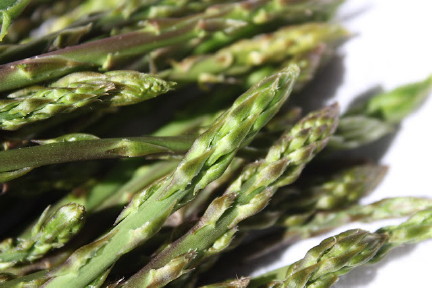 Anyway back to the family outing:we set off with  legions of kids, my own and loads of “sobrinos”(nephews and nieces). It transpired that lots of children was a key part of the plan(cheap labour!).

Once we got out of the cars onto the mountainside,the producing of  various plastic bags  and their distribution amongst all led me to ask the obvious:”What are the bags for?Aren’t we going for a walk?” The reply was,”No,no we are going to look for snails.Mountain snails”
This was a bit of a surprise and  as we were so many, I thought we were going to find bucket loads but these “caracoles serranos” are elusive and scarce(and little did I know it,legally protected). Thus the army of  child labour(and they talk about Asia!)….mathematical logic being the key.The more people the more snails! Simple equation. And kids love looking for things; as long as they find enough to keep them interested.
Needless to say I found very few snails and even the youngest kids found more than me! What I did notice straight away,was that my wife didnt partake (which has become a familar habit over the years). When I asked her why not,she said that she had hunted snails and other things as a kid and didnt like it .She only liked eating them!! Que listilla! 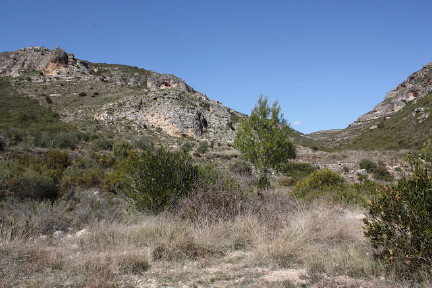 Typical Valencian countryside where you can find wild asparragus

“So what is the point of this post ?”, I hear some of you ask.Well,what I wanted to convey was the fact that the “hunting and gathering” was and still is  very much part of the culture here in Spain; especially in the more rural areas and it can be a lot of fun. All the men in my in laws’ pueblo were hunters and had at least one shotgun and shot anything bigger than a sparrow and like my wife’s family alot of people looked for things in the countryside according to what time of the year it  was. This “gathering” is still immensely popular in many parts of Spain.The search for wild mushrooms in the autumn is almost a religion in Catalonia, Teruel, Cuenca, Soria, Valencia and other regions.Then,to a lesser extent there is truffle hunting in certain areas. 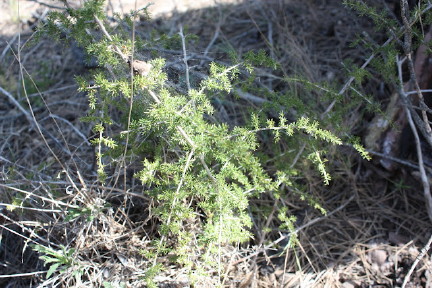 However,my favourite, which is on the  gatherer’s menu in the spring, is wild asparagus.You pick it in, great weather, with flowers blossoming all around and it is relatively easy to find.No need for hoards of kids(which is good  because mine are all grown up ) and it is  such a good(and healthy) ingredient for a tortilla . Delicious. Also it is a way of living cheaply(I should have put this forward as an idea to my blogging colleague of much fame,Mr.Will Peach for  his post Save money in Spain:10 smart ways ) Living off the land is  another  option! Some of you will probably know alot of  about wild asparagus and other plants but if you dont know the wild asparagus plant then here are a couple of photos:

I will describe the plant and where you can find it,so if you have never tried it next time you are in the country you can try your hand at it. Well, there are two types of plant.One more common round here,SE Spain and one which is bigger, rougher and less fine and I have seen in ,Cuenca, Teruel,Soria and even Galicia.The more elegant plant of the two although very prickly is realtively easy to detect.It grows in places in the shade and normally near some type of water source but not necessarily.It can grow quite big(nearly a metre high sometimes) but  normally has  three or four sprouting branches coming out of the ground up to knee level and nearby these main branches of pencil thickness appear the new sprouting asparagus. 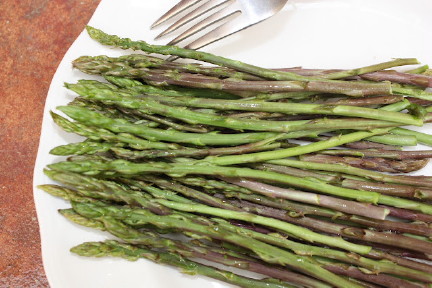 On the hardier plant the asparagus is slightly thicker.The one we find round here in Valenica and Murcia is normally a bit thinner than a pencil. It is like the asparagus on the plate above.
Normally the more remote a place the easier it is to find, quite often at the base of trees in the shade but it can also be found just about anywhere.A short stick is useful for parting the prickly branches and of course not a good idea in Spain to stick your hand under undergrowth without seeing what’s there! 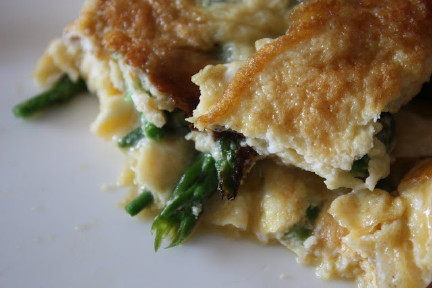 which is like a  minutely small spinachy/herby plant ,called bladder campion in English,which cleaned up  also makes amazing tortillas and is a delicacy fried by itself. It is very popular in Murcia and I am told in many parts of  Andalucia .They really are excellent. If you have the chance a good tortilla de collejas is well worth trying. 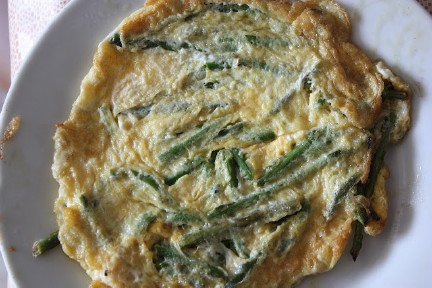 All this collecting, gathering in the end besides being a good way to obtain fresh and different raw materials it is also a very social activity  with plenty of banter,healthy competition and skiving off  to sit in the shade and chat.
And I will never forget when I asked a ten year old English nephew of mine,Ed, who came over for a week  to visit us  , what did he like best about his visit  to Spain. He answered without hesitation, “Snail hunting!”

Footnote: Special thanks to the cooks Ana Maria, and Julia who doesnt collect asparagus but is the best omelette maker around.

8 thoughts on “Spanish Treasure Hunting is Good For You”