A seemingly straight forward  recipe and  Spain’s best known gastronomic dish is curiously misunderstood by  a lot of  foreigners and some Spaniards. Of course, Paella and sangria on the beach are  all on a tourists’  “must do” list which gives  the dish a certain Benidormish  publicity. In reality nothing is further from the truth. 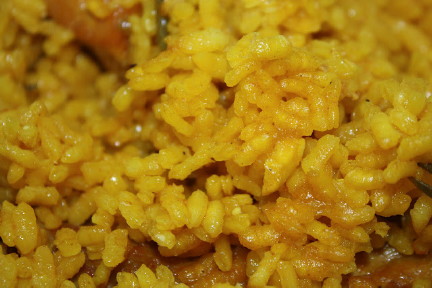 A truly complicated dish , it has many forms, indeed, hundreds and  the recipes vary  regionally and even from town to town. I worked for years in a company which was based between two large towns  which were only three kilometers  apart, here in Valencia, and  I can fondly recall heated arguments over whether a Paella Valenciana  has red peppers in it or not.  And this proud arguing over the real ingredients of Paella only really goes on in the Valencia region. Everywhere else just produce their interpretation and that pride in what comes from your land is not the same.. The Valencianos are proud of their Paella and their rice (I know people who eat a rice dish  everyday!)

Rice has been grown in Valencia for many centuries and it is  the Moors who are said to be the instigators of actually growing it efficiently….you know the old  line “What did the Moors ever do for us?” Eh? Well , with their centuries’ long occupation they brought irrigation which transformed  southern  Spain into an efficient and huge fruit and vegetable garden which with drip feed irrigation today has  made it the supplier of most European  produce in the winter. The Moors also also bought architecture, medicine, literature, artesans of amazing quality  and an unmatched  castle building ability all way ahead of the Iberian culture of the time. But all that’s for another posting. So once the Valencianos had rice plus irrigation it was only a short step to putting  Paella on the table!
In Valencia , Paella is normally Paella Valenciana, although many other types are also eaten. The original recipe according to some sources was made from rice, eels and snails. This actually is fairly logical as the rice fields of Valencia are around the Albufera lake which is a big expanse of water and is separated from the sea by a narrow strip of land so  plenty of eels  and snails. However, the traditional basis of the dish  is rice(locally grown preferibly  Bomba variety(a roundish variety),chicken and rabbit,  and fresh vegetables.(Rice with duck is also quite common  and one of the best versions I have tried.). Paella is a country/peasant invention so the ingredients are what was readily available in the local countryside and could be cooked over an open fire. 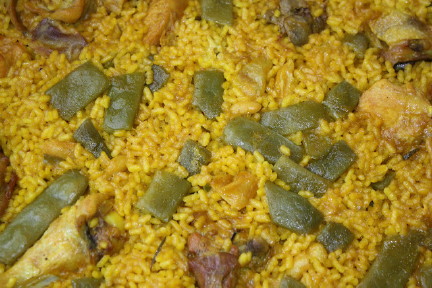 Food and Holidays go well together

I am not going to bore you with lists of types of Paella but it is worth mentioning the popular ones and my own favourite,Paella de Verduras. Paella Marisco(seafood) is a  logical seaside extension, Mixta (Mixed seafood and chicken and veg),and Arroz a Banda which is a variation of Paella with the rice cooked in a seafood broth and spread very thinly  in the paella pan with  just a few small peeled prawns and maybe a few  pieces of diced squid and a type of garlic mayonnaise).Eaten by the sea, staring at the  brilliant blue Mediterranean, accompanied with white wine it is an exquisite experience. Also Arroz Negro(Black rice) made with squid ink is delicious, this also has squid and red peppers(depending who you speak to!). 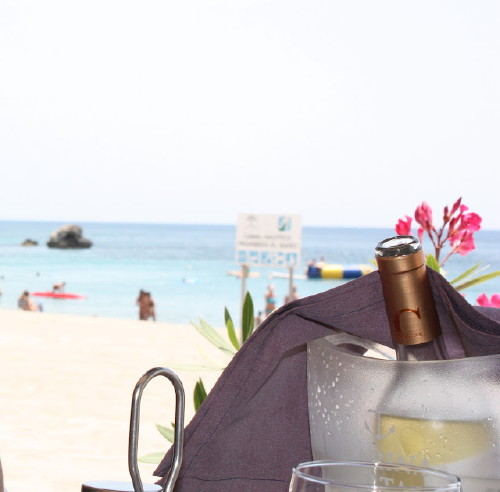 White wine for the Arroz a Banda at the beach

Then, there are an array of more regional rices like Arroz del Señoret(which is more like a a seafood stew with rice),Arroz Murciano (made  by my mother in law) similar to a Paella but very meaty (free range chicken bought live!)more moist and cooked in a deeper pan. I think I could write a post just on this rice alone as it is  very special and cooked by my mother in law and my brother in law it is simply perfection! The preparation is borderline ritualistic.
Nowadays, you can buy  industrially produced Paella , frozen, canned or otherwise. You can buy it by the portion  at takeaways, or order it from your local bar or restaurant  and take it home in the paella  returning the it later, washed up or not!  It has become part and parcel of everyday life but the beauty of it  is, is its flexibility as a dish meaning you can use  the ingredients best preferred or most easily at hand.  I have left the secret of cooking it, its social aspect, and  why men are  the best Paella cooks for another post (Paella Part 2 which I will post in a few weeks time.Rereading that, “social aspect” jumps out at me. The social aspect is that Paella is very much The Sunday dish for many people in Valencia and  did you know traditionally you should eat Paella from its pan as a group and with a spoon?