The first time I saw it was in 1983. I noticed it because it was in the middle of nowhere, on a long stretch of straight road, some way out of Teruel. It was basically a small monument-like affair a way back from the main Zaragoza-Teruel road but very noticeable because the land there is made up of flat rolling plains reflecting the heat of the summer and helping the bitter cold winds cross the high plains quickly without impediments in the winter. The monument broke the monotonous flat horizon. Even though it stuck out somewhat, I would not have stopped except for two things. I saw a black and red anarchist flag of the CNT-FAI (the Anarchist groups) and I had literally just finished reading Hugh Thomas’s tome on the Spanish Civil War so I was extremely interested about those times. So, curiosity got the best of me and I parked the car and walked back to the place. 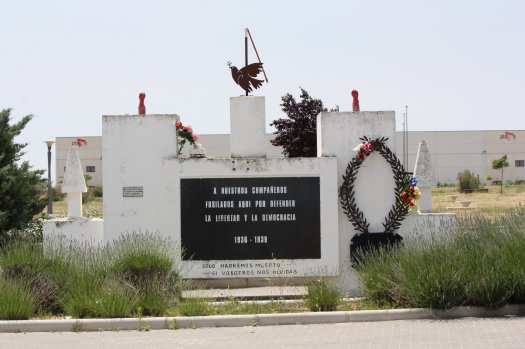 This is the monument to the victims shot at Pozos del Caudé,Teruel, during the Spanish Civil War

On approaching the site I read the small sign there. It was a well (Los Pozos de Caudé) and it was where hundreds (later documented to be over a thousand) were shot during the Spanish Civil War. Other small signs were dedications to murdered members of different families.

It is difficult to describe the horror and the spine-chilling sensation you feel when you read that hundreds were shot on that very spot and thrown down the well until it was so full they dug mass graves nearby to dispose of the bodies. Historically, it seems the murders on this spot were carried out principally by the Nationalists but also by the Republicans (Teruel changed hands a couple of times). But what really shook me was that I had read about it in Thomas’s book and I stumbled upon the mass grave without looking for it. It was an eery coincidence but above all the idea that forty four years earlier this senseless killing took place right on this desolate spot a few kilometres outside of the beautiful city of Teruel. I have read so much about the Civil War but the pure hate, cruelty and senselessness of war, especially a civil war, eludes those of us fortunate enough not to have to live through such an experience. One can only imagine the horrors of having your father/mother/brother/sister/friend or loved one dragged away in the middle of the night not to know where or how they were killed. 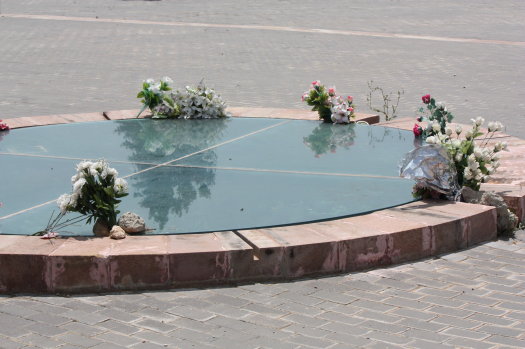 The well,now covered, 85 metres deep, was filled with executed people  and when it was full they dug mass graves to dispose of the bodies

This type of indiscriminate killing happened all over the country and is a very sensitive subject in Spain, even today. Some Spanish friends of mine don’t like discussing the topic much and others have told me stories about their families which are horrifying and make one understand why the underlying feelings about those dark times are still present in Spain although mainly under the surface, half-forgotten but still remembered.

We were in Teruel  a month ago and had left the city on the old main road and not on the new motorway and I was surprised to see the monument again as we drove along.Surprised because it didn’t seem to be in the same place. I did a u-turn and went back to the rectangular block-like memorial which was now inside an industrial estate which had, over the last thirty years, eaten up the flat rolling plain . We pulled over and got out to check if it was the same monument we had seen thirty years ago. There were more plaques from more families of the murdered and the monument was bigger but it was much as I remembered it but with a  different atmosphere as now it was surrounded by warehouses and factories. Before it was a desolately open mountain plain almost in the middle of nowhere. Presumably, that’s precisely why they took people there to shoot them. Now it’s a modern day concrete maze of large industrial buildings. Maybe it is a good thing as more people will see it and possibly stop and remember the poor souls who died there without trial, without reason and without sense. 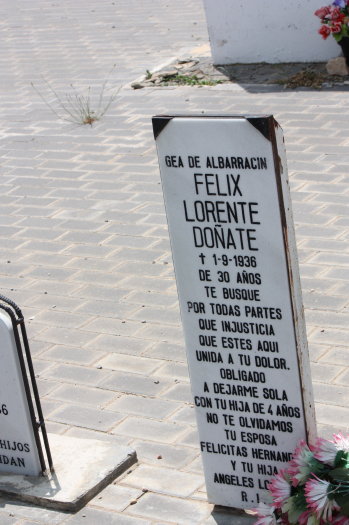 A memorial plaque remembering one of the murdered. He left a wife and 4 year old child. As were so many,he was shot in the summer of 1936 just after the rebellion by the Nationalists.

I have since read a little about  Los Pozos del Caudé and this article was interesting: El Periodico de Aragon. According to this article,one of the reasons they knew that an estimated 1005 people had been murdered here was because there was a witness. Yes, a witness who was present in the area everytime they came out with the condemned. He was the local shepherd (Teruel is big sheep country ) who slept nearby with his herd and recorded in a notebook the number of shots fired;a brave thing to do under the circumstances. Apparently, he got to know the difference between a rifle shot and pistol (coup de grace) shot and with his jottings historians have been able to verify other witness accounts and documents and that 1005 was the number of individuals sacrificed to hatred. (Curiously, I recently read of a case in the Alpujarras of a shepherd telling a similar story, stating that they shot so many people(around 4,000) in the Barranco de Carrizal, that his sheep got totally accustomed to the rifle shots to the point that they  stopped flinching from the noise of the shots). 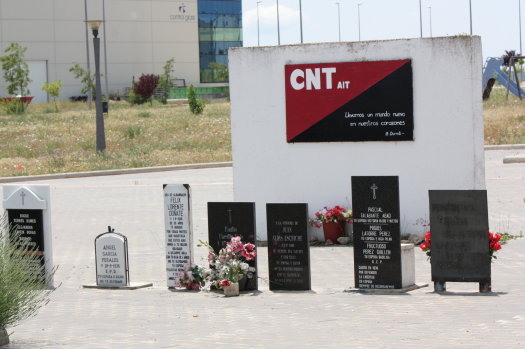 When you read witness accounts of these atrocities during the Civil War and the stories of why people were chosen to be shot it was so often for the most ridiculous reasons….for being the local teacher, town mayor, a union member, local priest, landowner, for not going to church, for going to church, for belonging to an agricultural association or union, for being a member of the opposite political party, for being the personal enemy of someone,for someone having a grudge against you because of an argument over land,a girl or politics and many more bizarre reasons. Most people murdered were just innocents. Amongst the victims shot, in the case of Los Pozos de Caudé, and thrown down the well outside of Teruel was an all girl musical band from Cella which is between Teruel and Albarracin. They were murdered because their band was the local agricultural union band. Reading the list of the murdered makes for uncomfortable reading.Mindnumbing stuff and uncomfortably close in time for so much ignorance and hatred.

Teruel is a beautiful part of Spain but this ungainly monument  needs to be maintained so people don’t forget the evil of that period and don’t repeat the mistakes of the past. As they say,“Lest We Forget”.

The Spanish Thyme Traveller organise trips on which you can experience the amazing food and culture in the  beautiful interior of Valencia and Teruel. Check out our webpage by clicking on this logo:

3 thoughts on “One Thousand and Five Victims Remembered.”