When I first entered into Julia’s household and met her family I quickly realised it was a closely knit unit but in no time at all I was accepted as part of that unit. Besides the fact that Julia’s grandmother couldn’t pronounce Patrick and called me everything but my name and  insisted I was French,  I fitted in pretty easily and I was bestowed the privilege of being part of the “tribe”.(Julia has always said that here in Spain people are nearer to being tribal than in the northern European countries). I was accepted unconditionally. 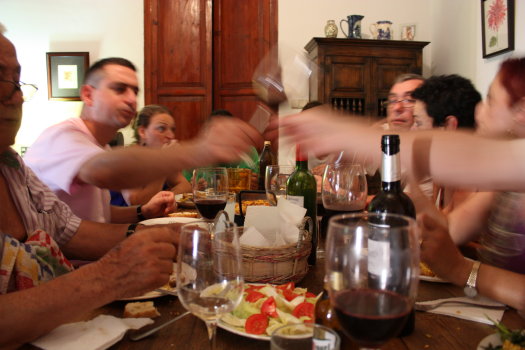 Once you’re on “the inside” everything becomes so much clearer. “La Familia” is a very functional and highly valued part of Spanish society. Not long ago it was still important to have lots of children .The church actively encouraged it and it was especially important for some poor landowners who needed cheap manual labour whilst for others children were a economic burden.So up until recently thus the importance of having sons. A sort of agricultural hangover that most of N. Europe got over by the end of the 19th century but for Spain it went on well into the 20th century. This is probably one of the reasons that Spanish society today is still  a very “macho” one. 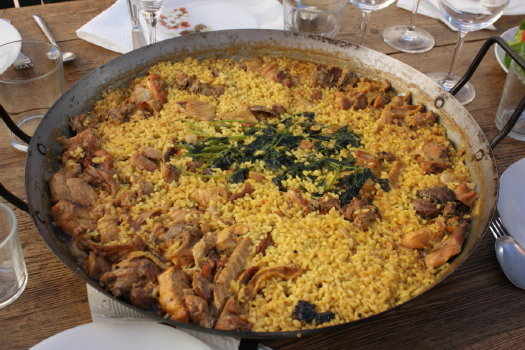 Murcian rice..similar to paella but in a deeper pan producing a moist rice.

By being on the inside you can see how the family works and why. Not only is contact maintained with one’s “pueblo” by visiting it regularly but also with the grandparents, aunts,uncles,cousins and nephews and nieces.The list of cousins once removed etc is long and Spaniards normally still have active social contact with nearly all their family members.It took me some time to remember all the names(now they all have kids I have lost the plot a bit). 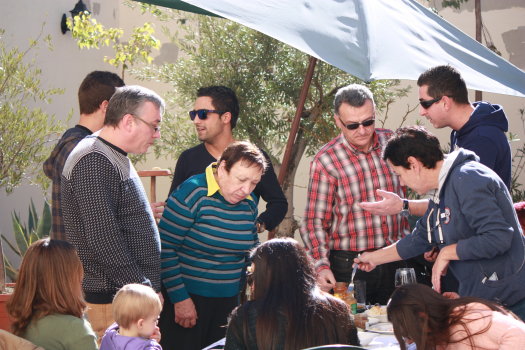 And there is a reason why social unrest in Spain during these hard economic times is really not that apparent. It’s true you can see more homeless and hard up people on the street but rioting  and looting is almost non exisitent. It is not because there are ample social benefits such as unemployment benefit and help for the needy. On the contrary unemployment benefit in Spain runs out after two years and the government has been making big cuts to all kinds of social help. So how do people survive? If their whole family is unemployed for more than two years, how do they cope? How do all the long term unemployed and 50% of under 28 year olds survive? The answer is simply: “La Familia”.It is not a mafia-like “Cosa Nostra” network in Spain but it is a network that supports its own in hard times.Everyone pulls together.Pure and simple: family  members  support each other. I know of cases of one son supporting his whole family,his parents and brothers or families surviving because they have moved back into their parents house etc etc. In Spain the family partly substitutes the social benefits system and is what makes the country tick.. 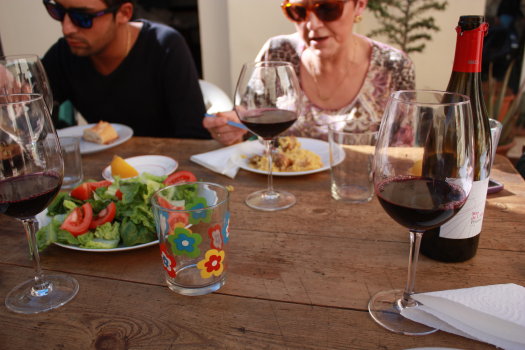 Above all, the family is the source of all moral support and love. Most problems are aired and discussed, sometimes to exaggeration.But everyone has a clear role within the family and the adults protect and educate the youngsters(as in any country) but  what is different here is that kids are included in most activities and especially at mealtimes. However,young they may be their presence at the meal table is seen as important and the act of sharing is impressed upon them. Sharing the moment,sharing the food(so many Spanish dishes are put in the centre of the table and shared from a central plate/dish eg.Paella,tapas,salads etc) and sharing space. I say space because at most family meals between ten and twenty people at the table is common so space has to be shared  and everyone learns from an early age that each has their space but you have to ensure that you get on with your neighbour in order to reach the central dish or not be sidelined.I reckon this sharing in a large group helps make Spanish people more gregarious and keen to socialise in general.

What I most like about “La Familia” is that all ages respect and feel genuine affection for their grandparents.It is probably the single most important aspect of the Spanish family unit is that the grandparents are actively involved and in many cases totally involved in bringing up their grandchildren sharing with them experiences, adventures, problems, food etc This produces a real bond between the generations and is key to the whole fabric of the family unit. 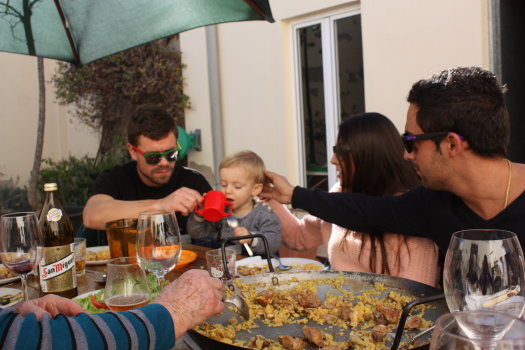 Youngsters and  partying aged members of the family really do respect their elders and always make it to the Sunday family meal even if they have been out all night the night before. It is a kind of unwritten norm that you can go out but you can’t miss the family lunch and indeed they don’t want to.. 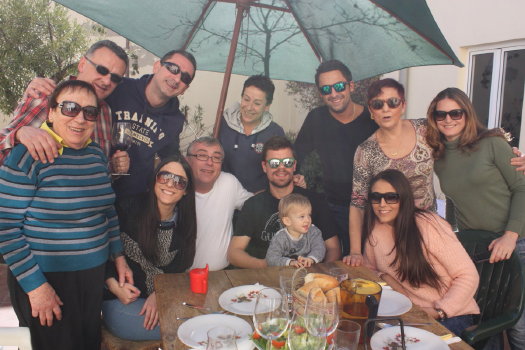 Some of the Spanish “Familia”

What I like is the informality of these family gatherings. I came from a household which was pretty relaxed but Sunday meals were a fairly traditional family gathering with a certain ordered formality to them(the good crockery,eating in the dining room, instead of the kitchen etc). Fun meals but slightly formal. So here in Spain thirty years ago what impressed me straight away, was the organised anarchy at mealtimes,the noise, the great food in the centre of the table,wine and the importance given to the source of the ingredients. This was and still is a big topic of conversation. Where to buy the best free range rabbit/chicken/olive oil/wine etc. Supermarkets  should never be used to shop for a Sunday meal….the rabbit from so and so who lives down the road or the chicken from the guy who has 30 chickens in the countryside and looks as if he is constantly hungover,unshaved and underwashed. It’s a look you’d think he had finetuned to look more authentic but he is just authentic.

I can’t tell you if the family here is better or worse than in any other country but it is different and it is totally genuine. If there is one thing Spanish people value above all else it is “La Familia” and to be honest for me it is easy to see why.