What have a man dressed in white tights looking like a strange lady, the Borgia Pope Alexander VI and my grandson got in common?

It sounds a bit like some obscure joke but they really have or rather did have a few days ago quite a bit in common. At the beginning of the month,in Xativa,there was a celebration of  the religious fiesta of Corpus Christi with the typical and tradition procession that includes “gigantes” giants, “cabezudos” bigheads, dances by traditional figures and the famous Valencian “Danza de La Moma” which is a traditional dance by a figure which represents Virtue and is tempted by the Seven Deadly Sins. See this post for details of this tradition:  Fiestas on your doorstep. 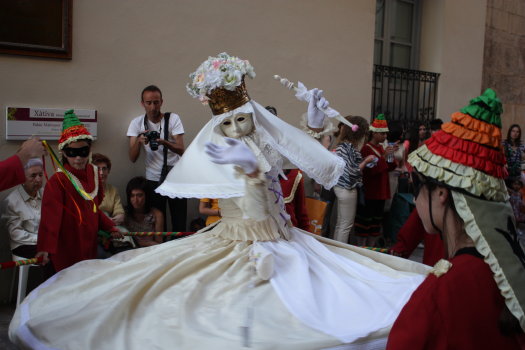 So the streets were full of  costumed people, tradition,fun and had definite spring fiesta atmosphere. It was with this background that our grandson was baptised. The heat and intense sunshine sent us all searching for shade whilst waiting to go into the church. It was a happy occasion with family and friends greeting each other in the shade of the mulberry tree in the square.So this was a double fiesta,Corpus Christi and then our grandson’s christening. 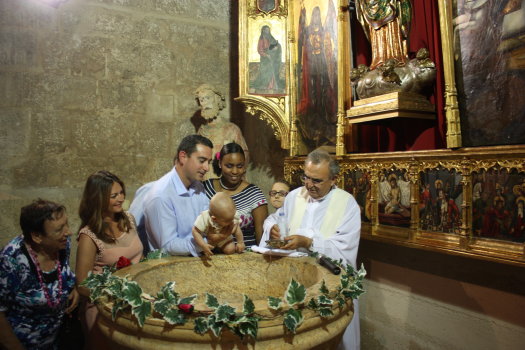 And all in the church of San Pedro

Whilst we were in the church for the christening I couldn’t help thinking a couple of things: Firstly, that I always find the religious fiestas and ceremonies such as weddings,first communions in Spain,a bit incongruent as the majority of Spanish people dont go to church or really believe in the church but for these social occasions it still seems to be the thing to do. And then, as I looked around the church of San Pedro and admired the simple architecture,I tried to imagine how Rodrigo Borgia,later to become the infamous  Borgia Pope Alexander VI, was baptised in this very same church some 600 years ago. 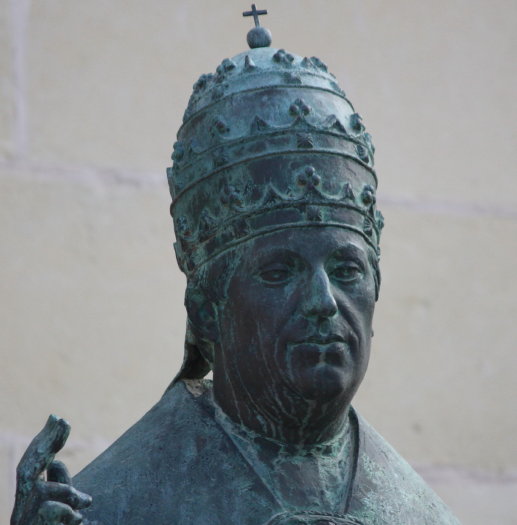 Presumably,he also had his family and their friends present and had the same annointment and holy water treatment. The ceremony,this time round,was reasonably quick and we were soon out in the sunlight again heading down the street where Alexander VI had returned as Pope to visit his native town and his family house. They say the whole street was an explosion of colour, as each house had its balcony adorned with fine coloured silk embroidered sheets and as his calvacade rode slowly by flowers and flower petals rained down upon it dropped by the neighbours from their balconies. It was a triumphal and significant return putting Valencia and Xativa on the map in European politics.Having strolled past his natal house we arrived at the restaurant, where we had some great tapas and an excellent paella valenciana with all the family and some friends. 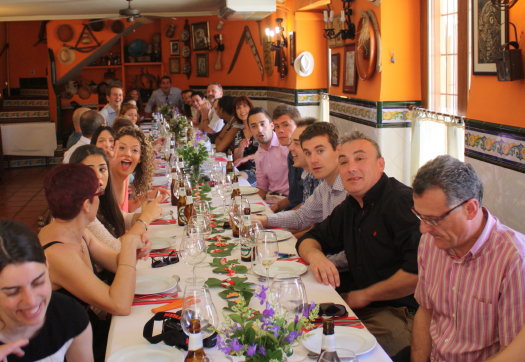 The family fiesta in Spain

A typical Spanish fiesta;family,food,wine and friends. We wiled away the afternoon eating and drinking and chatting and laughing. I am sure they probably ate a more sumptious meal at Rodrigo Borgia’s christening celebration but I doubt they would have had as much fun as we did!

2 thoughts on “Family and Fiestas in Spain”