The vast majority of the  fifty five million visitors who come to Spain each year  come to visit the country for the sun and sea  or to  visit one or  more of the big cities. Very few actually go inland and really explore the interior regions.These places get only the most intrepid of tourists. So this is the first of a mini series of posts about the interior of Valencia and Teruel shedding a bit of light on what there is to explore. If you’re interested in kowing more keep reading! This one is about the Iberos and their unique ancient civilisation which lasted roughly from 800BC to 200AD, remains of which can be found all over the interior of Valencia.. 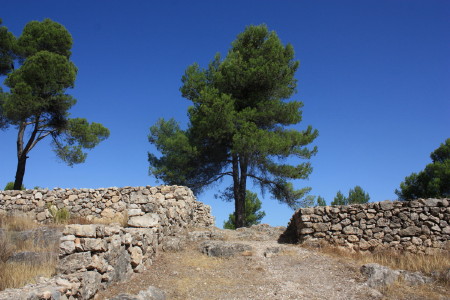 The Iberos ,for some reason have been overlooked by most as a cultural asset in Spain . Something, that once you find out a little about them seems unbelievable. They had a society and organisation way ahead of other civilisations in Europe at the same time. This is a quick overview of what they were like,what they built,what technology they had  and how they lived. 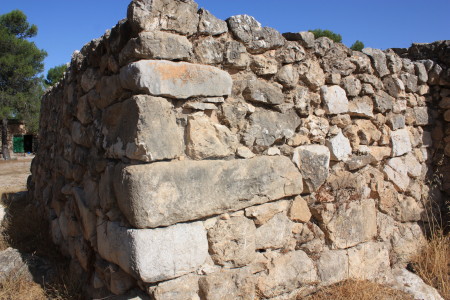 Remains of a solid defense system of an Ibero town

.-Town Planning and Urbanisation: They built settlement/towns on tops of steep hills or mountains much like the Iron Age forts in the UK but with more stonework and nearly always in stunningly beautiful places.They were also superior road builders and were building roads before the Romans arrived in Spain.There is a spectacular carved road at one of best sites, Castellar de Meca. 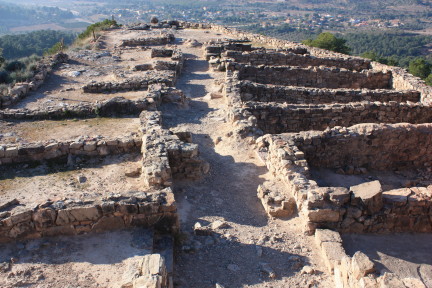 -Technology: The Iron Age Ipad existed. Well sort of ! They had a slightly early version. It is known they had their own language and way of writing. Their system for writng and sharing information was by the use of lead and wooden plaques/slabs/tablets,several of which have been found with a mixture of hieroglyphics and writing scratched on them.The writng on these plaques of metal uses an alphabet which is thought to have come from the Phoenicians and the Greeks but the experts still havent fully understood it.The lead plaque found at Les Alcusses is thought to be an invoice or list of items.Its design and symbols are used  by a local bodega, Celler del Roure, on the label of one of their great wines which is named after the nearby Ibero town Les Alcusses.

Arms wise the Iberos had the lastest technology in swords. The Falcata,a curved sword, was  feared by the Romans,who redesigned their shields because of its efficiency. 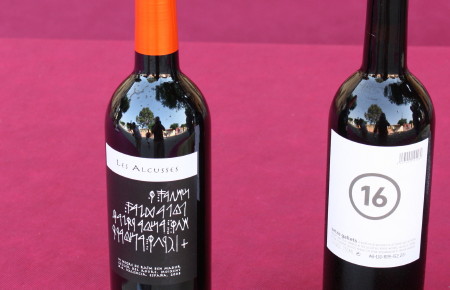 Les Alcusses with the text from the Ibero lead plaque(Ipad)

– Networking: The Iberos were surprising active traders.Remains of Eastern Mediterranean pottery,jewellery and artefacts have been found at various Ibero sites. They were known to have alliances and wars between the different tribes.

-Cultural events: They enjoyed music and dancing,especially amongst the ruling classes.Both these activities can be seen on pottery  remains found at different sites. 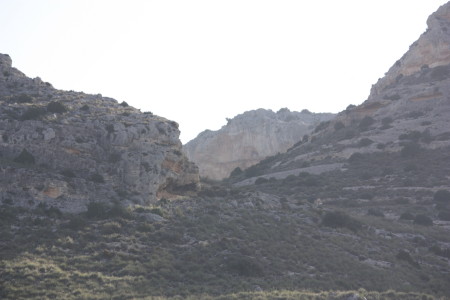 – Hobbies/Wanderlust: Hunting and war were big pastimes and gave good reason to travel and discover other regions. They were horse born warriors(riding two to a horse,the passenger turning into an infantryman in battle). 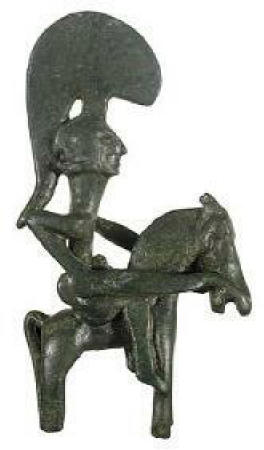 – Must have items: Besides  owning a horse which was top of their wish list, one simply had to have the latest votive figure. These figurines were used,it is thought in religious ceremonies, and most households had them as offerings or for good luck.In towns like Les Alcusses. A fortified hilltop town it was was abandoned in a hurry, and these figures were found in houses and in the street and have also been found in tombs in other parts of Spain. 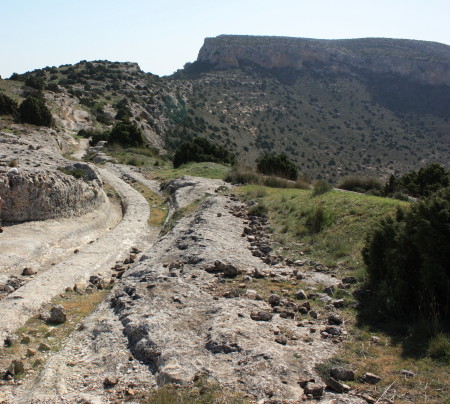 Carved road in the rock at Castellar de Meca

So although their society was a warlike tribal one it was also one which built organised  towns with proper urban planning,with streets,water tanks,drainage and storage systems, and carved roads to transport goods.They had music,dancing and the written word. All this within strategically placed fortified hilltop towns dotted round Eastern and southern Spain. If you love nature and like  history then these places are so much fun to visit.Nearly all of them in places of  real wildnerness and beauty.Well worth the effort to visit. 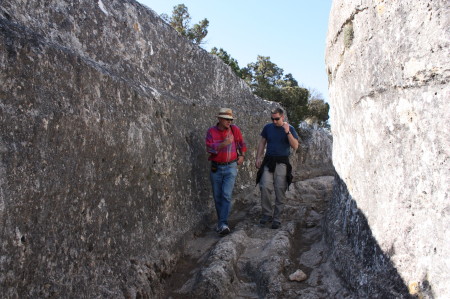 Walking the road carved out of rock at Castellar

They can be found principally in Aragon,Catalonia,Valencia and Andalucia.  A  fun way to explore these places and the interior of  Valencia is with The Spanish Thyme Traveller on their Iberos Tour. They visit  two of the best remains of Ibero towns(Les Alcusses and Castellar de Meca) in the interior of the province.

And if you are in Valencia El Museo de Prehistoria is a great place to visit full of fascinating history.

4 thoughts on “Discovering the interior of Spain: The Iberos and their Ipads.”