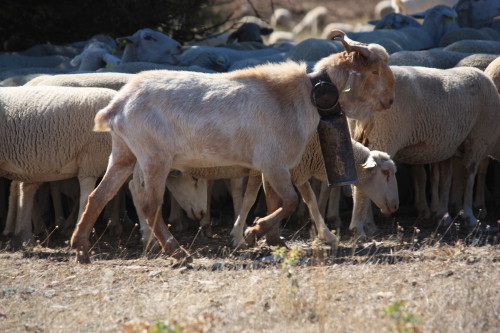 Goats and sheep in the Sierra

As the shepherd made his way along the hilltop he could see the small village huddled down between the rocky mountains.Darkness was descending and the twinkling village lights made it easy for him to navigate his way down the mountainside using the  distant lights as a focus point.

Around him as he walked was the clanging and tinkling of bells as his flock of wool laden sheep and large horned goats grazed the short grass and stumpy thyme plants which protruded from the thin layer of snow that covered the sierra. The man adjusted his blanket which he had thrown over his shoulder and wrapped round his waist,typical of this mountain area, and pulled his beret down a bit further over his head and walked on. It was cold, very cold  with that clean crisp and dry atmosphere.He looked forward to getting home. Home meant the family, a welcome fire, and  some festive food.. As it was Christmas Eve he looked forward to arriving more than normal. His weary limbs aching with every footstep he took on the rocky path.

For a moment he lost sight of the village, as he entered a dense pine tree wood which deadened the sound of his footsteps and those of his fourlegged companions whose bells continued their uncoordinated chorus.The thought of his wife, children,brothers and sisters waiting at home egged him on and he quickened his pace. Imagining them all around the fire when he arrived made him smile.They were to have a Christmas Eve like every year, round the fire barbecuing lamb,”embutidos”,roasting potatoes,chestnuts and passing round the “aguilando” (festive pastries/cakes) once they had their fill of meat.

Then they would sing “villancicos” Christmas songs and laugh until late into the night. The singing of songs would be  accompanied by the instruments from around the household, a bottle with spoon, an old tin,a tambourine, a box and wooden spoon along with the odd “zambomba”(a strange drumlike instrument with a stick in the middle which moved up  and down makes a strange noise).They would tell stories from the past about the family members and villagers all with a comic twist.How they would laugh.Later they would visit their neighbours, singing and asking for “aguilando”.

Coming out of the shadow of the trees, the shepherd made his way down the now steep path and in the darkening shadows thought he saw a low swiftmoving shape slinking off onto the shadows of the wood.Was it a dreaded wolf? He wasn’t too worried as he had his three trusty “mastines”(mountain mastiff dogs) with him with their spiked collars. They were used to seeing off the hungry sierra wolves. Not only that they were very near the safety of the  “pueblo” now and the wolves round there  almost never ventured into the cluster of stone houses which gathered close around the large stone church and main square.Pure numbers of man and dog kept them at bay.

Underfoot, the weary wanderer could now feel the familiar cobbled stone of the path as it widened into a track as it started to  enter the outskirts of  the village, passing the small orchards, and vegetable gardens of his neighbours,the stone walls both standing guard and guiding him along the track to his long awaited destination. He could hear singing and laughter in the distance and could smell the woodsmoke from the soon to be cooking fires.

“Life is good,” he thought to his weary self, “Life is very good”. Arriving at his low stone barn so typical of the region, he opened the doors, put his flock safely away for the night,safe from the bitter cold and safe from predators. He closed the doors and left the dogs out to watch out for the ever present lupine enemy.Walking the final metres of the stony road he reached the village proper and  could now clearly hear the singing of Christmas songs and smiled to himself as he opened the door to his house. “Feliz Navidad!” he shouted as he entered his house and saw everyone sat around the fire talking,eating and singing.

“Feliz Navidad!” everyone shouted back. He was home.

8 thoughts on “Christmas Eve in the Sierra”