This is my first entry so it’s history in the making!!
Well just to say that this last week I visited Teruel with my wife Julia, having not been there for nearly 20 years and I have to say:  WOW! We were surprised by so many changes.Lots of renovated buildings and a great feel to the city which was beautiful, clean and appeared to be thriving. The weather was amazingly cold: -14ºC at night and -3ºC during the day but with stunning sunlight and blues skies. 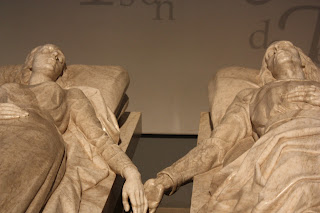 The Lovers of Teruel

We visited the mausoleum of the “Lovers of Teruel” which are basically a Spanish version of Romeo and Juliet from the 13th century but based on real people rather than fiction.Love,promises,broken hearts and death all make a great backdrop to this fascinating medieval city full of beautiful examples of Mudejar(a mixture of Arabic and Christian/Spanish styles) architecture. 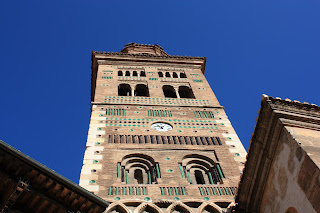 Once we had tired of seeing the sights we went in search of Restaurante Yain which Raul Igual(Best Spanish Sommelier 2010) runs and we had a really excellent meal,a friendly chat with Raul who gave us a tour of his chic restaurant,private dining rooms and wine cellar.

For lunch I had a Sweet and sour pepper and mozzarella salad followed by a simply delicious Cod scrambled eggs with “straw” potatoes.All this accompanied with a half botttle of Care wine from the Cariñena region, which was surprisingly smooth.Whilst Julia had “Rabo de Toro” Oxtail stewed in red wine. My sweet was Mandarin and Cava sorbete with chocolate drops.Refreshing,tasty and  fruity.

We stayed in a small family run hotel  which was value for money with great personal service and a fascinating 50m long tunnel 6 metres below street level which led from the hotel building to a nearby church.The owner herself, Maria Jose gave us a mini guided tour along it with candle lit lanterns included.Very atmospheric! It was a secret tunnel which exited in the sacristy of the church and was used by priests who lived in the house  hundreds of years ago.

The next day, well rested, we visited the town museum and  found time to have a tapa of the famous Teruel ham in a local bar before departing for the warmer climes of Valencia.

Visiting Teruel again was like seeing an old friend ,who looks great and is on good form, after a long time without seeing each other…it left us with  a feeling of contentment and satisfaction. We had a great time.
Hasta pronto!
http://www.thespanishthymetraveller.com/

6 thoughts on “A Return to Teruel”