It all started when I was seventeen in 1977,with a black and white photo and an old road map of Spain pinned on a wall.

A friend of mine at school,Robin, was mad about Spain, and photography.He adored a photographer,who was then completely unknown to me,Robert Capa. He showed me the famous “Falling Soldier” photo and I was morbidly fascinated by that unfortunate Republican fighter snapped by Capa in the Spanish Civil War; caught in his last moment of life. I became fascinated by the story behind the image,Spain’s civil war and, of course,Capa’s story.

Shortly afterwards my friend put a map of Spain up on his bedroom wall. It kept us(Robin, another friend called Johnny, and myself) occupied for many an hour poring over it dreaming about the trips around Spain we were going to make hitching,walking and on train. For a while it was youthful enthusiasm without any real committment or intention but over a few weeks our excitement at the idea of hitching round Spain grew from youthful fantasy into a real plan and we were soon blindfolding each other and saying,”Right! Wherever I pin this drawing pin we have to visit that place on our trip.” As the blindfold came off,seeing the strange almost arabic sounding names of villages lost in some mountain range seemed so exciting and exotic.

The day we set off on the ferry to France I can recall clearly. It is difficult to put into words the excitement,the anticipation of discovering new places,the slight worry about what pycho mass murderers  would pick us up in their vans,where we would sleep and so on. Above all a sense of adventure prevailed and laughter….laughs,laughs and more laughs. My friend,John, fortunately is one of the funnier people I know so our long waits and the stranger lifts were alleviated by lots of laughter.It’s a cliché but we were young and totally carefree. We slept rough in fields,in hostals,in train stations, on beaches and were constantly told in Spain that it was illegal to hitch there but we got lifts pretty easily and saw young soldiers, on leave, hitching.We only once got stopped by the Guardia Civil who were more interested in where we were going not in how we were going. And we weren’t in a hurry so if we wanted to stay in a village or town for a bit longer then we stayed. Any problems were not really problems, just minor setbacks.We had the pleasure of visiting Burgos, Madrid, Segovia, El Valle de los Caidos(rather than pleasure ‘experience’), El Escorial,Toledo, Granada, Malaga, Marbella, Cordoba, Sevilla, Jerez and Huelva amongst many smaller and often more fascinating places. 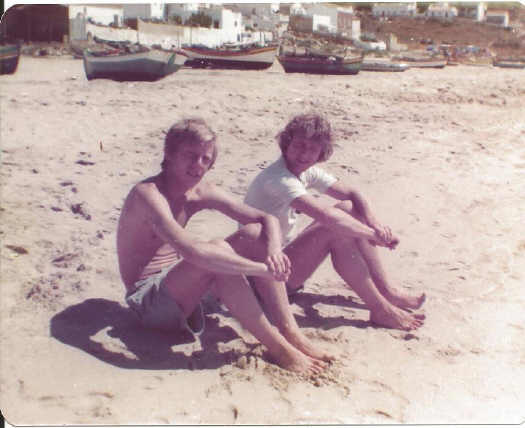 What I loved about Spain was the heat,the scenery,the sunlight, the mountains,the bustle, the food and the way people interacted with you so naturally and generously. Everyone wanted to impress us,buy us drinks,food and show us their hometown. Energetic hospitality and  gushing enthusiasm for their country and local area….something I hadn’t experienced in the UK, at least not in sleepy rural Kent. 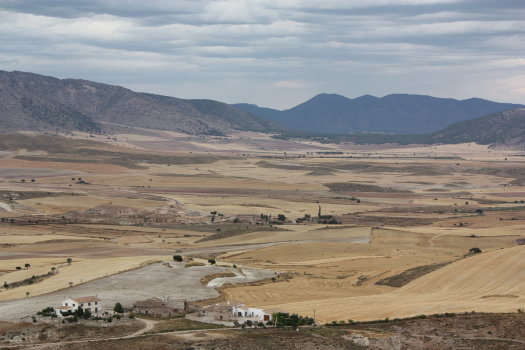 Whether it was strolling round monuments,through country lanes or sipping beer in the main plaza or simply watching the sunrise from one’s sleeping bag in a middle of a field, everyday was baking hot, fun, different and exciting.Everyone was so positive and energy giving that I couldn’t  help but be taken in. What I really liked was that people smiled at you openly with no hidden agenda…just being friendly. As we made our way across the sunburnt countryside of Spain we met all kinds of people from Communist Basque mountaineers to bullfighting youths from Cadiz,travelling salesman from Madrid in cars with no hint of airconditioning,families having dinner on the table next to us inviting us to a drink. The balmy nights,the tasty tapas of all kinds,the smell of bars with a mix of black tobacco and fried olive oil. and the dusty countryside stick in my memory as though it was yesterday. 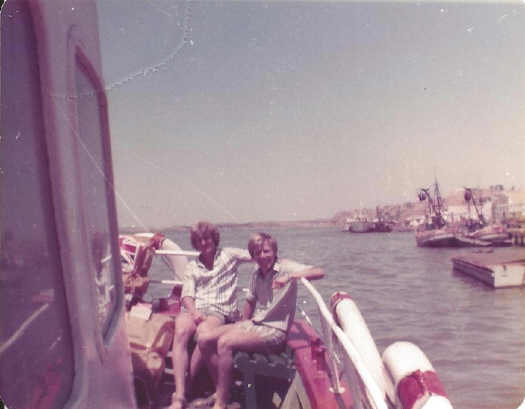 Crossing the River Guadiana to Portuagl.In those days there was no road;just a small ferry.

Thirty-five years later, I have a lovely Spanish wife,three great and grown up Spanish(and British) kids and a happy Spanish life. I often think of my friend,Robin, who showed me Robert Capa’s photo all those years ago and Johnny who shared the adventure round Spain with me that hot summer.Little did they(or I) know what they were putting into action.

19 thoughts on “A Love Affair with Spain”